Messages from Mother…. Earth Mother up on Kindle, etc. 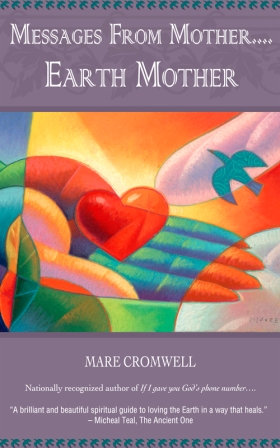 It’s official! Messages from Mother…. Earth Mother is now available on Kindle and other e-book platforms. Yay! Here is the link to Amazon.

Referred to as “The Voice of Earth Mother” by a gifted Shoshone elder, Mare Cromwell is a multi-award-winning author, Medicine woman/Lightworker and healer. She has also been told by another gifted elder that her work with Earth Mother is in the prophecies. Her books include: "The Great Mother Bible"; "Messages from Mother.... Earth Mother"; and "If I gave you God’s phone number.... Searching for Spirituality in America". She has studied with Native American teachers for twenty-two years and sat on the World Council for Wisdom Gatherings for three years. Mare leads workshops on our Sacred Planet-Earth Mother, Womb Wisdom and Sacred Silliness and more. She is the visionary and producer of the 1000 Goddesses Gathering in Washington DC. Mare loves to be involved in Ceremony. She is also a former worm herder. She calls Western Maryland home. www.marecromwell.com
View all posts by Mare Cromwell →
This entry was posted in Animal Spirit Medicine, Divine Feminine, Earth Mother, earth spirituality, nature, Sacred Feminine, Society Ills, Writing and tagged amazon, e-book, Kindle, Mare Cromwell, Messages from Mother.... Earth Mother. Bookmark the permalink.